There’s no question that the pandemic accelerated the digital shift, pushing online retail sales to new heights in a matter of months — faster than most industry watchers ever thought possible. But now, one year into the crisis — and with hopes rising that a post-COVID return to normalcy is at least in sight — the focus in many eCommerce circles has turned to so-called stickiness, or just how much of those temporary digital gains will show some staying power.

According to a new study of Mastercard’s massive global purchasing network, nearly one trillion dollars in additional online spending made its way to retailers, restaurants and grocery stores over the past 12 months, in a surge that lifted eCommerce’s overall share to 20 percent from 14 percent in 2019.

As much as that study put a tangible number on the digital shift and quantified the rising eCommerce tide, the findings also qualified the advance and noted that “the variation among sectors was significant.” Put another way: Certain regions and retailers did better than others during the pandemic and are expected to continue to benefit from consumers’ increasing use of marketplaces, websites, apps and social media when it comes time to buy things.

Drilling down into the eight non-food and restaurant retail categories that Mastercard measured, many nuanced discrepancies emerge — both good and bad, as well as from a pre- and post-COVID purview.

As the below chart shows, at the peak of the crisis, all eight categories saw increases in their share of online sales — but as those red columns show, the variation among sectors has been extreme. 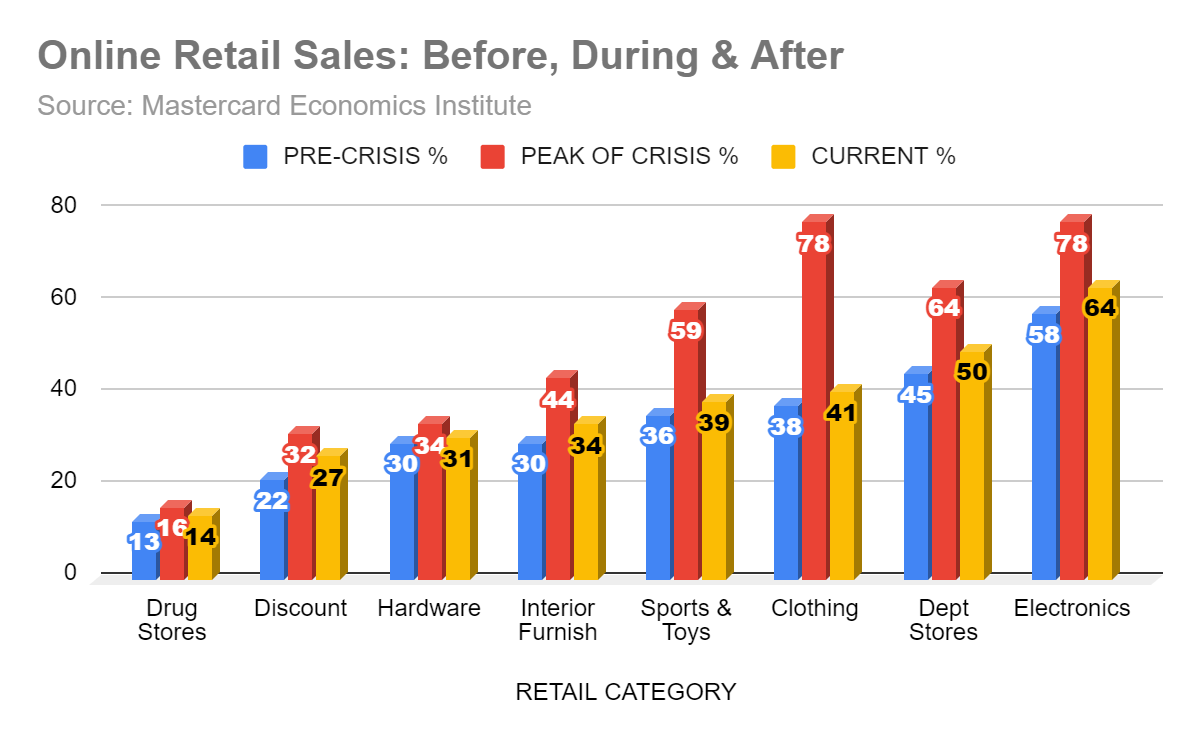 While there were large short-term gains in categories like department stores, clothing, sporting goods and toys when almost everything was closed or restricted, that’s only part of the stor. The other side of the rainbow — the orange column — shows how much of the online sales surge that retailers have been able to keep.

By that measure, Mastercard flagged the discount stores category as a stand-out performer among its non-food peers. Although the discounters started off with a relatively modest base of a 22 percent online sales share, the global payments firm’s economists expect they will hang onto roughly half of the 10-percentage-point digital shift gains they racked up last year.

This permanent shift — or stickiness — is important for a number of reasons, not the least of which is a company’s ability to listen to its customers and adapt. If there was one consistent theme that emerged from the pandemic, it was that people not only wanted, but often demanded, touchless online ordering — and usually delivery, too.

The study also shows the relative online underperformance that segments such as drug stores, hardware stores and interior furnishings retailers had going into the crisis compared to other categories, a barometer of digital preparedness that Mastercard said played out in geographies around the world. In short, the companies and categories that were best prepared before the crisis were the ones that performed the best when COVID suddenly struck.

Just as every category realized at least some degree of a pandemic pop in online sales, all eight segments have seen varying levels of retreat from their peak levels. 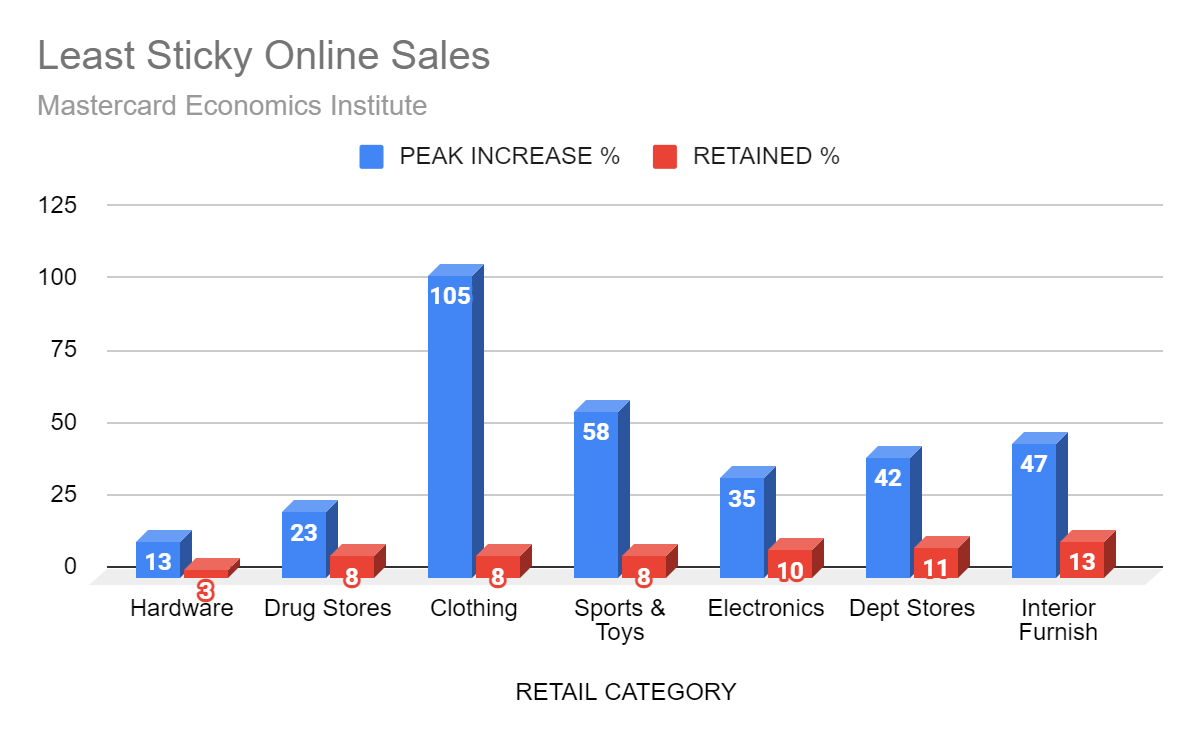 For example, as the chart above shows, hardware stores have retained just one percentage point (or 3 percent) of their peak online increases, rising from 30 percent pre-COVID to 34 percent at the peak, and then settling back down almost where their online sales were a year ago.

While it’s unclear why hardware customers weren’t — and still aren’t — doing as much of their buying online compared to five other retail categories, at the very least it illustrates the digital opportunity that Lowe’s and Home Depot are pursuing, as they reported 121 percent and 83 percent eCommerce sales increases, respectively, in their most recent quarters.

Other notable non-sticky categories that handed back a lot of their COVID-driven online surges include drug stores, which held onto only about 8 percent of a 23 percent bump they experienced off a low base, which worked out to a single percentage point gain to 14 percent from a 13 percent share of digital sales.

However, perhaps most stark of all has been the online erosion experienced in the clothing category, which saw its digital share more than double at the peak of the crisis, only to slide almost all the way back down in a 38-to-78-to-41 percent round trip that left the sector with online sales that were up just 3 percent. As Mastercard said: “The gain in clothing was significant, but faded quickly.”

If you’re prone to look for silver linings, it could be argued that clothing’s online sales reversion is an indication of just how much people still like to shop in physical stores, especially for apparel. Given that 80 percent of retail sales still occur in brick-and-mortar shops, there’s clearly some truth to that notion.

“The pandemic may be the purest test of the world’s progress toward digitalization to date, proving in the starkest possible terms how dynamic digital economies have been most resilient to the economic turmoil and are best positioned for future growth,” said Bhaskar Chakravorti, dean of global business at The Fletcher School at Tufts University.