Cooped-up U.S. consumers are eager to dress up, get out, eat in restaurants and reconnect with the world, new economic analysis shows. The April Mastercard SpendingPulse report showed that U.S. retail sales jumped 23.3 percent last month versus a year ago, marking the latest indication that the economy is recovering.

An equally telling statistic within the new report showed that eCommerce sales still managed to grow roughly 20 percent from “record-shattering growth” posted last April, when most stores and restaurants were fully closed due to the pandemic lockdowns and consumers had little choice but to shop online.

“April’s retail sales growth reinforces that the American consumer is healthy and eager to spend, especially on categories such as restaurants, which have faced restrictions over the past year,” Steve Sadove, Mastercard senior advisor and former CEO of Saks, said in a statement, noting the confluence of tailwinds that are fueling the surge. “There are a lot of factors at play, including stimulus funds, pent-up demand and the desire to reconnect with friends and family. The fact is that people are excited to gather again, and they’re refreshing their look for the occasion.”

The new findings from Mastercard come one week ahead of the U.S. Commerce Department’s monthly retail sales report that is due out next Friday. This follows other recent reports, such as the record rise in personal income, which suggest a similar surge is afoot. 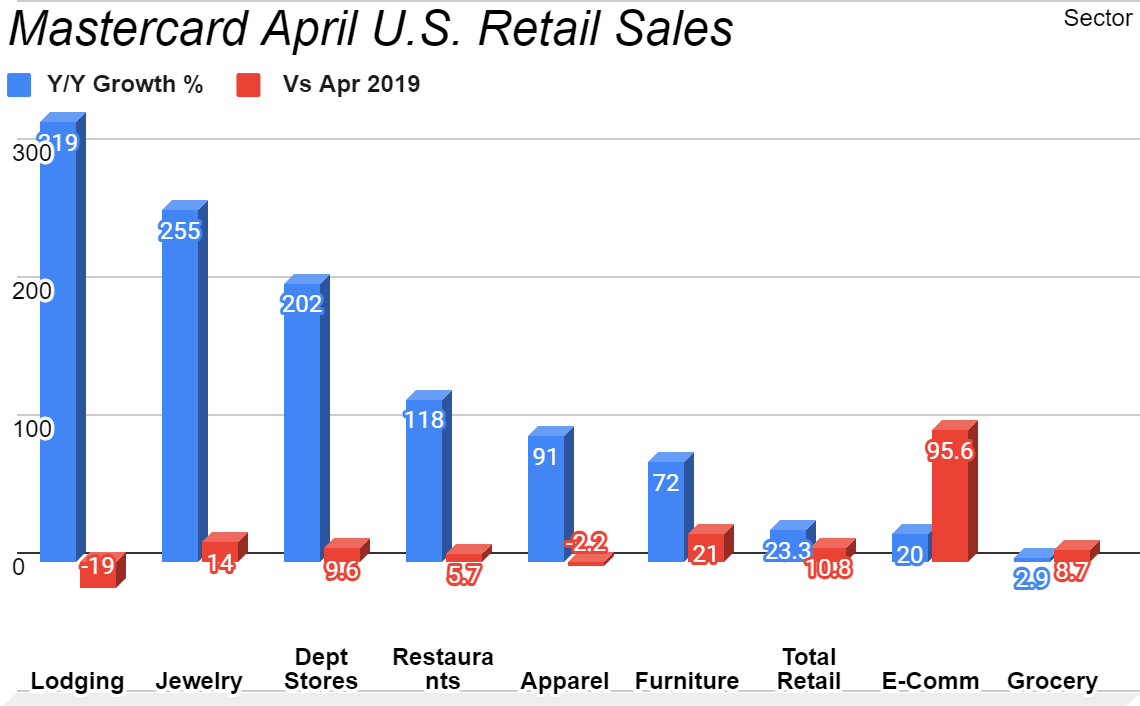 By analyzing sales activity in the Mastercard payments network, as well as survey-based estimates for transactions paid for with cash or checks, the study showed that some of the hardest-hit sectors are enjoying the biggest bounce.

Specifically, the triple-digit year-on-year sales growth posted in the lodging, jewelry, department store and restaurant categories were exponentially higher than the 23.3 percent total retail gain, which excludes gasoline and cars.

Although the annual sales rebound was reflected in across-the-board gains, when compared to pre-pandemic results, lodging and apparel were still below the levels they posted in April of 2019, by 19 percent and 2.3 percent, respectively. At the same time, the two-year comparisons showed that eCommerce sales had risen the most, posting a 95 percent increase over the past 24 months.

In addition, Mastercard reported that eCommerce made up a larger portion of retail activity last month, accounting for a 21.6 percent share of total retail, led by strong digital sales proportions in apparel (61.7 percent), department stores (21.0 percent) and jewelry (15.7 percent). Those results are consistent with PYMNTS’ most recent Global Shopping Index, which also saw a 60 percent increase in purchases made by digital devices since March 2020.

As much as restaurants and retailers are clearly experiencing a rebound, Mastercard also pointed out that due to geographical, economic and household differences, “the recovery has not been universal or consistent,” implying that there’s still room for broader participation and further improvement.